Introduction to the Chapman Stick 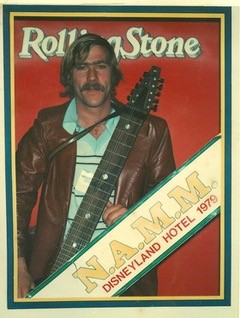 Join us Saturday, 12/5/2020, at 7pm EST as member Michael Kollwitz presents a webinar on the Chapman Stick.

Michael Kollwitz will give us an overview of the history of the Emmett Chapman and his involvement with the Chapman Stick over the last forty years. Michael will demonstrate how it works and what sets it apart from other stringed instruments.

Top Ten Billboard charting New Age artist Michael Kollwitz is a Stickman, but he’s no drummer. He is one
of very few musicians who has mastered an unusual stringed instrument called ‘The Chapman Stick.’ For over
forty years, he has stayed true to his mission to bring The Stick’s unique music to as many people as he can. In
1976, Michael was fortunate to cross paths with The Stick’s inventor, Emmett Chapman. To Michael’s delight,
Emmett took him under his wing, and the two embarked on a teacher-student journey that has lasted to this day.
The Chapman Stick’s magic may well lie in the simplicity of its design. It’s part of the guitar family, and
indeed, resembles the neck and head of a guitar, but is played more like a piano with two-handed tapping, and
has an incredibly versatile range of sounds. With powerful, expressive qualities, the instrument provides players
with endless possibilities, and Michael has harnessed these with virtuosic effect.

Being a first-generation Stickman came with decided benefits for Michael. Consistently booked for
musical gigs, he traveled extensively, opening for the Beach Boys one year, and earning raves for his one-of-a-kind
performances along the way. By the early 2000s, he had amassed such a following that he decided to record his
first solo album and join the festival and fair circuit to play music full time. Sacramento became home base, and
with his typical flair, Michael became a fixture in the community as a street performer in Old Sacramento. He had
numerous television appearances, radio interviews, and even starred as the subject of the award-winning
documentary, “Stick Man.” In 2007, seeking new adventures, he relocated to Hawaii.

Hawaii proved to be a musically fertile place for Michael. He crossed paths with Carlos Santana while
playing a gig on Maui, who was visibly moved by Michael’s music. Mick Fleetwood also happened upon Michael
during a performance. Fleetwood told him that Hawaiian music would sound amazing played on The Stick. Michael
went on to record six albums (with the help of triple Grammy award-winning Steely Dan engineer, Dave Russell)
during his time on Maui.

Michael has since taken The Stick to new heights, recording music in such diverse genres as Jazz, Classic
Rock, Latin, Hawaiian, Americana, New Age, and Holiday music. Michael’s music has spread worldwide thanks to
considerable airplay including “All Things Considered” on NPR and many television appearances over the years. He
was the subject of an award-winning documentary short film which captured First Place on CurrentTV in May
2007.

Michael’s 21st album, ‘Serenity- Peaceful Music on The Chapman Stick,’ marked a change in course for his
music and enthralled listeners worldwide. ‘Serenity I’ reached #8 on the Sept. 2017 Zone Music Reporter chart
and was nominated for Best Contemporary Instrumental Album of 2017 by One World Music Radio in the United
Kingdom. It also gained placements on the ‘Spa’ channels of multiple international airlines and the video for the
track “Mystic Vista” received a nomination from the Hollywood Music In Media awards in early 2018.
His 22nd album, ‘Serenity II,’ debuted at #8 on the Billboard Top Ten New Age albums chart one week
after its release in April of 2018. It remained #10 on the ZMR New Age charts for two months during April & May In 2019 it received Grammy consideration, and two big nominations: Best New Age Album of 2018 from the Independent Music Awards and Best Instrumental Acoustic Album of 2018 from Zone Music Reporter. It was also licensed by the CARE Channel to play in hundreds of hospitals across the US from 2019 to 2021. The track “Wrapped In Love” received a nomination in the New Age category from The Global Peace Song Awards.

His 23rd release, ‘Serenity III,’ (Jan 2019) received rave reviews and debuted simultaneously
in the Top Five of all three major New Age album charts including Billboard at #3 in January and #2 in
February. ‘Serenity III’ remained in the Top Ten of all of the New Age charts for months. The album also won a
Silver Medal for outstanding achievement in June 2019 from the Global Music Awards.

Michael’s latest album, ‘Santa Plays The Stick’ is a whimsical collection of traditional Christmas songs
and new holiday originals with an official release date of November 15, 2019.

Over the years, Michael has introduced many other musicians to The Stick including Keith Emerson, Mick
Fleetwood and Herbie Hancock. Carlos Santana was visibly impressed by Michael’s music and called it “a gift from
the heart,” that made him feel good the moment he heard it.

Just in time for Christmas…

Unbeknownst to most, Santa Claus himself is a Chapman Stick player! He gets a lot of practice during the summer months at the North Pole when he’s not keeping the elves busy and the workshop tidy. He hopes you will enjoy these traditional favorites and four new originals by Michael Kollwitz (BMI).
SANTA PLAYS THE STICK was recorded solo using the extraordinary yet uncommon stringed instrument created by
Emmett Chapman in 1974 known as The Chapman Stick®.

Previous FMA Webinars:
10/21/2020 – “The Realities of Copyrights and Publishing for the Musician and the Composer” by NE ambassador Greg Knowles
11/27/2020 – “Music In The Skies: What Pilots Can Learn From Musicians” by SW ambassador & founding member Jay Mason